We have created a new column- US Election 2020 -where experts will analyze election scenario, week after weeks, until the election results are out, for the readers of The Indian Panorama.

Articles and comments are welcome, and may please be emailed to [email protected]

Stony Brook Professor Helmut Norpoth is doubling down on his “Primary Model,” which has correctly predicted 5 out of the past 6 elections since 1996 and every single election but two in the past 108 years.

“The primary model gives Trump a 91 per cent chance of winning in November, “ Norpoth said.  “This model gets it right for 25 of the 27 elections since 1912, when primaries were introduced.” 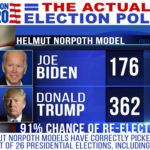 The two elections the model failed to predict were the 1960 election of John F. Kennedy and the 2000 election of George W. Bush.

We are still seven weeks out from the election, but if all you did was look at the polls, you might be discouraged about the chances of reelection for President Trump.   Most of the polls have him behind Biden and not looking good.  But of course as we know, polls are not particularly accurate and 2016 is a perfect example of that, especially when many seem to be slanted or often agenda-driven.   Most of these polls are sponsored by the mainstream media that puts out fake news.

It is hard to know how the pandemic, not to mention the riots and chaos being propagated by the radical left, are going to affect the election.  If you blame the party in power, that might adversely affect Trump and that is what the polls may be showing.  But if you see that he is far better to bring the economy back and is already doing that, if you see that voting for Biden and Democrats would open the door for even greater destruction and chaos from the radical left, then it would seem that that should push those in the middle toward Trump.  I personally know folks in the middle or who were liberals who could not stand Trump but now not only will be voting for him but pushing for him.  Because they are so outraged at what has been happening on both those fronts and the Democratic reaction to it all.  WILL THAT “SILENT MAJORITY” be speaking in November for Trump?

In May, Stony Brook professor Helmut Norpoth said his model was predicting that Trump would win.  Now he is doubling down on the prediction, even after the pandemic and riots.

Norpoth’s model is based upon performance in presidential primaries and that enthusiasm or the lack thereof as the strongest indicator of the ultimate outcome.    If in fact that is the measure, then there is no question that Trump trounced Biden big time in terms of enthusiasm.  Trump has had record turnout of folks in the primaries even when he was the guaranteed winner.  Biden in the early primaries had real trouble until South Carolina and is still objectionable than Bernie Sanders, albeit not by much.  It would be really hard to say that anyone is enthusiastic about Biden.

What favors Trump in 2020 as well as the cycle of presidential elections operating for nearly 200 years, as illustrated by the snapshots since 1960.   After one term in the White House the incumbent party is favored to win reelection unlike the situation when it has held office for two or more terms.

Norpoth’s model predicted Trump’s victory nine months before the election in 2016 and he predicts Trump will win by an even wider margin than he did then, 362 electoral votes versus 304 he had then.  If you thought they cried then, just wait if that happens in November, the meltdowns are going to be historic.

NEW YORK (TIP): Indian-American Sabrina Singh, who was earlier part of the communications team of former US Secretary of State Hillary Clinton’s 2016 presidential campaign, has been named Press Secretary of Democrat Vice-President candidate and […]

Michael Bloomberg: Trump should be impeached and doesn’t understand he works for the public

6 WEEKS TO PRESIDENTIAL ELECTION TRAFALGAR GROUP POLL WAS THE ONLY POLL THAT PREDICTED TRUMP WOULD WIN IN 2016. IT IS THE ONLY MOST RELIABLE POLL PREDICTING 2020 ELECTION “Arizona and Minnesota are in the […]