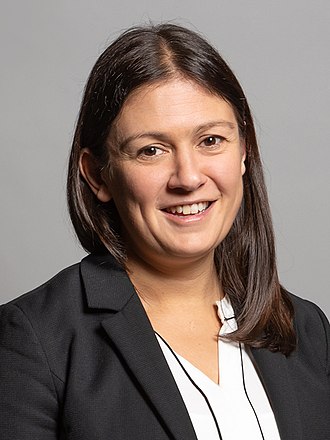 Lisa Nandy said her first focus will be on the “pressing matter” of Britons stranded abroad due to the coronavirus pandemic worldwide lockdown.

LONDON (TIP): Indian-origin British parliamentarian Lisa Nandy on Monday promised a constructive Opposition to the UK government as she got to work as the shadow foreign secretary in the newly elected Labour Party leader Keir Starmer’s top team.

The 40-year-old MP for Wigan in Greater Manchester was one of the first appointments to be announced by Starmer, who took over from Jeremy Corbyn as Leader of the Opposition over the weekend, and makes Nandy effectively his second in command on the frontbenches of the House of Commons.

British Sikh Labour MP Preet Kaur Gill also made it to the new Starmer-led team as shadow international development secretary and Goan-origin Valerie Vaz was chosen as shadow leader of the House.

Nandy thanked the new party leader for the “opportunity to serve” and in response to her counterpart in government, Foreign Secretary Dominic Raab’s congratulatory message, said her first focus will be on the “pressing matter” of Britons stranded abroad due to the coronavirus pandemic worldwide lockdown.

“You can be assured of constructive opposition and I look forward to speaking at the earliest opportunity about the coronavirus crisis and the pressing matter of Britons stranded abroad,” said Nandy, the daughter of India-born academic Dipak Nandy.

“It’s a real honor to be tasked with leading Labour’s foreign policy response in these difficult times,” she posted on Twitter soon after her shadow cabinet appointment on Sunday night.

Nandy came in third in a three-way Labour Party leadership postal ballot, which was won by Starmer who polled 275,780 votes followed by Rebecca Long-Bailey in distant second with 135,218 votes.

Though Long-Bailey was seen as aligned to the old guard led by Jeremy Corbyn, she has been appointed to the post of shadow education secretary.

Nandy, a vocal critic of the former leadership over its Brexit policies, is expected to emerge as a key Opposition voice under the new guard.

Her appointment in the top team is seen as among the many signs of Starmer’s plan to revamp the Opposition Labour Party, which had suffered a bruising defeat during the December 2019 General Election.

Among the other appointments, Angela Rayner, the newly elected deputy leader, was also made the Labour Party chair.

“We just lost four elections in a row and therefore of course we need to change. If we don’t change, we will lose the next general election,” he said, in one of his first interviews as Labour leader.

His win has been welcomed by Indian diaspora groups, who hope for a new chapter in the party’s connect with the 1.5-million-strong Indian-origin voter base in the UK which felt increasingly alienated under Corbyn’s perceived anti-India focus on contentious issues such as human rights in Kashmir.

“I am confident that under your leadership the Labour Party will further strengthen its historic bonds with India and will build enduring bridges to connect with the Indian diaspora in the UK,” said Ruchi Ghanashyam, the Indian High Commissioner to the UK, in her congratulatory message for Starmer.

(Except for the headline, this story has not been edited by TIP staff and is published from a syndicated feed.)

NEW YORK (TIP): Six Indian-Americans have been named recipients of prestigious Ellis Island Medal of Honor 2017- the highest civilian award in the US for immigrants. Among 88 recipients, the six Indian- Americans are – […]

Given the rapid spread of COVID-19 in the UK, where the death toll has crossed 6,000, and its impact on frontline ministers, questions around leadership have been increasingly doing the rounds LONDON (TIP): […]