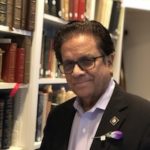 He is there where the sun does not shine,

Nor the moon, stars and lightning.

Then what to talk of this small flame (in my hand),

Everything (in the universe) shines only after the Lord,

And by His light alone are we all illuminated.

“Sun shines not, moon is not there; stars are not there.”

But if it is so transcendental, so completely exceeds our human comprehension, what is the next goal? -Try within.  Look into yourself, you will see the deepest there! – Dr. S. Radhakrishnan

For Dr,. Radhakrishnan,  everything, psychology, epistemology, metaphysics, ethics, education, politics, economics, science, religion, converges and culminates in spirit.  He was a philosopher by temperament, teacher by vocation, a statesman by choice, an administrator by discipline and he had demonstrated that versatile potentiality of the human mind suffused with the spirit of service.

It is truly significant that he had been able to offer masterly interpretation of the philosophy of Tagore and the ideology of Mahatma Gandhi even as he had given a lucid exposition of gospel of action enshrined in Bhagavat Gita, and the doctrine of nonviolence preached by Gautama Buddha.

There was a time when Indian philosophy and literature were looked down upon by the West.  McCauley, an English historian, had this to say in his minute on Indian Education, “It is, I believe, no exaggeration to say that all the historical information which has been collected from all the books written in the Sanskrit language is less valuable than what may be found in the most paltry abridgement used at preparatory schools in England.” But Dr. Radhakrishnan successfully demolished the profound ignorance of the West.  He said, “There are narrow minded people all over the world who think that their religion is the greatest and other people should accept.  That has not been the tradition of this country.  Our culture has spread in different directions in the East and West.”  After Sri Vivekananda, his concern was to present to the West the richness of the Eastern thought.  It is not a common saying that Indian Philosophy begins where Western Philosophy ends.

It is true from his works that East is East, and West is West, it cannot be denied that East plus West is the best.  He once said, “So far as the world of religion is concerned, freedom is the atmosphere in which religion can grow.” When wisdom dawns, ignorance dies, and evil is cut off at the root.  Man’s only hope is world community, a brotherhood, where truce is the abiding reality.  His philosophy was grounded in Advaita Vedanta, reinterpreting this tradition for all contemporary understanding.

He continued as an academic, he was absorbed into constructive politics. Dr. Radhakrishnan was awarded several high awards during his life, including a Knighthood in 1931, the Bharata Ratna, the highest civilian award in India, in 1954 and honorary membership of the British Royal order of Merit in 1963.  He was born in Madras presidency (present Tamil Nadu) to a Telugu speaking family and attended and studied at Madras Christian College.  He was Vice Chancellor of Andhra University and Banares Hindu University.  He was the Spalding Professor of Eastern Religion and Ethics at the University of Oxford.  He was also appointed Haskell Lecturer in Comparative Religion at the University of Chicago.  He was first ambassador to Soviet Union, then first Vice President of Indian Republic.

Plato’s concept of philosophy king, and the Indian idea of Rajarishi have a striking similarity.  This idea was realized in Marcus Aurelius, Janaka, Ashoka and Akbar.  In modern times, Dr. Radhakrishnan exemplified this concept when he was elected President of India in 1962.  In 1964, the Pope conferred with Dr. Radhakrishnan in Bombay (Mumbai) the decoration of one of the Chiefs of Golden Army of Angels.  He passed away in 1975.  Dr. Radhakrishnan started as a teacher and spent almost all of his life as a teacher.

He was also one of the founders of Help Aged in India; Dr. Radhakrishnan believed that “teachers should be the best minds in the country”.  Since 1962, his birthday has been celebrated in India as Teachers’ Day on the 5th of September, every year.

In Dr. Radhakrishnan’s life, there is a message of fulfillment.  His journey from a village was neither easy nor fast, but it was accomplished by sheer ability and faith.  There is an extraordinary reassuring message of self confidence and determination.  He said, “All that we have to do is to develop this solidarity about country.  An act of one man to inspire that spirit of oneness to belong to one country, one culture, one tradition.  That is very essential.”  This was his message to youth of the country. 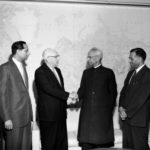 In this June 4, 1953 picture at the United Nations, Dr. Radhakrishnan (third from right) is seen shaking hands with Mr. Byron Price, Acting Secretary-General of the U.N., as Mr. Rajeshwar Dayal (left), India’s Permanent Representative to the United Nations, and Mr. Shamaldharee Lall, Assistant Secretary-General of the U.N. in charge of the Department of Conference and General Services, look on.

Radhakrishnan led the Indian delegation to the United Nations Educational, Scientific and Cultural Organization (UNESCO; 1946–52) and was elected chairman of UNESCO’s executive board (1948–49). From 1949 to 1952 he served as Indian ambassador to the Soviet Union. On his return to India in 1952 he was elected vice president, and on May 11, 1962, he was elected president, succeeding Rajendra Prasad, who was the first president of independent India. Radhakrishnan retired from politics five years later.

Radhakrishnan’s written works include Indian Philosophy, 2 vol. (1923–27), The Philosophy of the Upanishads (1924), An Idealist View of Life (1932), Eastern Religions and Western Thought (1939), and East and West: Some Reflections (1955).  In his lectures and books he tried to interpret Indian thought for Westerners. (Encyclopedia Britannica)

Here is a list of the major books  he authored.

(The author is a West Virginia based ophthalmologist whose mission in life is to make the world free of preventable childhood blindness.  The Eye Foundation of America he founded almost 4 decades ago  is fully committed and dedicated to fulfilling his vision)

COLOMBO (TIP): Sri Lankan President Mahinda Rajapaksa on Jan 15 appointed his cabinet’s legal adviser as the country’s new chief justice to succeed Shirani Bandaranayake, whose impeachment created much furore both inside and outside the […]

UNITED NATIONS (TIP): The Islamic State group has significantly expanded its control over Libya, fueling demand by the country’s warring parties for more arms to confront the threat, UN experts have told the Security Council. […]

MUMBAI (TIP): The Reserve Bank of India (RBI) has allowed nonresident Indians (NRIs) to operate resident bank accounts on “either or survivor” basis. According to RBI, banks may include an NRI close relative in existing […]