Why keep places of worship out of corona fight

“Perhaps never before  humanity felt so scared and helpless. A minute or invisible spec of a virus, riding a molecule of protein, has put the might of the world to shame. Nations armed with nuclear and biological weapons have lost count of ideas that could instill confidence in the masses. Doors of the places of worship have been shut and mobility of mankind halted.”

Change is the only thing that is permanent in life. But the change brought about by the corona virus pandemic makes Mount Everest look like an ordinary hillock. So massive is the change that all those factors, including society, religion, governance and human values that have been under criticism for fragmenting the universe in general and mankind in particular for centuries, have suddenly become irrelevant. It does not matter where and which part of the world you are located, sense of insecurity or fear of the invisible is the same.

Intriguingly, humans who have been priding themselves to be the masters of the planet earth, stand tamed while all other members of the living kingdom, with their newly acquired freedom – freedom from the fear of the man and his nefarious designs of wreaking havoc with Mother Nature – are wondering where humans have disappeared.

Perhaps never before  humanity felt so scared and helpless. A minute or invisible spec of a virus, riding a molecule of protein, has put the might of the world to shame. Nations armed with nuclear and biological weapons have lost count of ideas that could instill confidence in the masses. Doors of the places of worship have been shut and mobility of mankind halted.

Fear of the invisible is so strong that people have even refused to claim the dead bodies of their near and dear ones. Doctors, specialists and super specialists are working round the clock to contain the spread of this latest virus that has been proving more dangerous than any of the previous ones, including Spanish virus, Zika, Nipah or even AIDS. Medical researchers are engaged in finding a vaccine, hoping for a breakthrough later this year or early next year. All you hear every morning is the new number of those who tested positive or the number of those who lost their battle against corona. Day in and day out health experts are warning the people that corona has come to live with us. Social distancing or social alienation, they maintain, is the only way to contain its spread. Humanity should be prepared to shed its traditional ways of getting together in good or bad times. Results are already before us. Social gatherings are fast becoming a thing of the past.

One of social scientists and an ardent advocate of “human freedoms” went to the extent of saying that “if the medical experts have their say they would love humans to hibernate till the pandemic lasts.”

Scientists, including Doctors, seldom approve of natural remedies that people have been successfully using for centuries together to counter natural and unnatural disasters. These therapies were generally based on unflinching faith in spirituality or naturopathy.

Though the guidelines promulgated by the medical world through governments are being religiously followed the world over, it may be very risky to allow faith or religious beliefs as a part of the warfare  against corona. After all remedy lies in the faith, whether it is in the modern health care system or the traditional natural ways. For centuries, faith in the latter has worked though scientists may not approve of any involvement of religion or traditional faith in what they believe to be their domain.

A multilateral approach that encompasses both traditional and modern scientific theories should be the ideal solution to fight the virus wars that are becoming increasingly regular. The world has already encountered four during the past two decades before Corona knocked at our doors.

Spirituality or even religious faiths that have stood by humanity in difficult times, unfortunately, also have their values overshadowed. Places of worship that provided solace, peace and relief from natural and unnatural disasters, including epidemics, since the time immemorial, are now standing mute spectators to the unprecedented agony facing mankind.

Before jumping to any conclusion, there is a need to study the role the spirituality has played for the wellbeing of mankind over the centuries. Take the case of Sikhism, the youngest and perhaps one of the most scientific religions of the world. It is this faith, started by Sri Guru Nanak Dev Ji more than 550 years ago, that runs more or less on logical or scientific lines. There are numerous instances that Sikhism supports the scientific thought process. 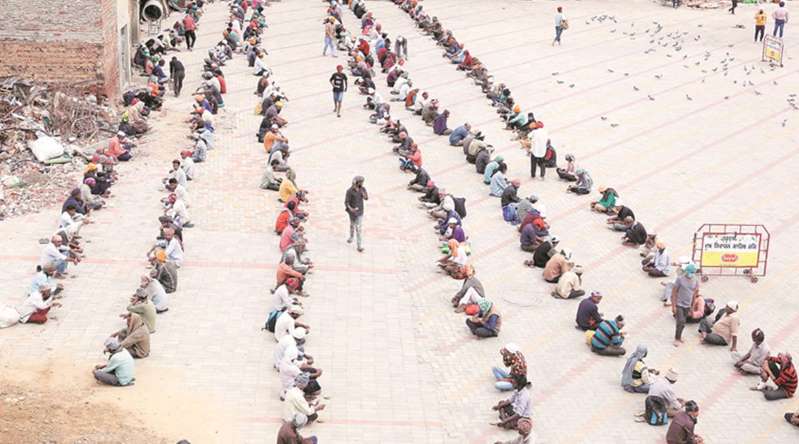 Giving religious sanctity to these three basic elements of life and avoiding use of tobacco were perhaps the most recognizable initiatives of Sikhism that also gave the world of voluntarism. Tradition of community kitchen or langar started by the founder of Sikh faith has given it global recognition. Even now when all the places of worship are ordered to be closed under lockdown conditions, community kitchens of gurdwaras continue to work to feed the poor, needy and those in distress. This role of Sikh institutions has come for praise from none other than Indian PM Narendra Modi.

However, these arguments were ignored while taking forward the fight against coronavirus. Unfortunately, places of worship were put in the category of possible spread zones of the virus. It is why authorities and medical experts are issuing warnings against gatherings or congregations at places of worship. Instead of temples of peace, solace, and meditation, these places are being viewed as suspected epicenters or source centers of infectious corona virus. Unfortunately there have been tirades to paint some minority religious groups for the alleged spread of the virus. It may be pertinent to mention that famous and historic religious or worship places have seldom proved to be the source center for the spread of any disease or infection. Instead, these abodes of peace, spirituality and tranquility have always stood as big support zone for the suffering humanity.

There have been appeals for special prayers individually or at limited mask clad gatherings to rid the world of this corona menace, places of worship are no more allowed to be frequented to assuage the hurt mankind has inflicted upon Mother Nature over the centuries.

The Malaysian example is there for all of us. When it allowed special religious congregations, especially on Fridays, it mandated the requirement to observe social distancing, practice sanitizing besides recording proper details (of congregation members) for record purposes. Members of the congregation are also required to bring their own prayer mats and take ablutions at home before going to the mosques.

India being far more religious can take a leaf or two from the Malaysian experiment.

For me, religion is a way of life. It not only provides me light through dark phases that dot day to day life but also guides me to stay calm and focused for peaceful coexistence with fellow beings. Essentially, someone who endeavors to be a good human being, contributes a part of his income towards charities, lends helping hand to others in distress and lives a healthy, hygienic life by following the tenets as enshrined in the sacred scriptures is a fairly religious person.

Meditation and listening to Holy Scriptures, scientists admit, strengthen the human immune system. It is not the numbers but the state of mind that makes one vulnerable to infection. Faith and positive feelings make a huge difference. It is in no way to denigrate the good work scientists have been doing to prevent spread of diseases.

And their belief was immense. They would support it by saying that thousands of people who take holy dips in sacred sarovars or even in rivers like Ganges not only get their sins washed away but also get cured of their ailments. There was definitely logic behind their belief.

However, researchers in health care neither subscribe to these theories of natural or spiritual cure centers nor make them a part of their action plan simply because there have been no scientific backups for these claims. This may be the reason that the governments and medical experts feel that taking holy dips or visiting places of worship may not be of much help in fighting the corona pandemic. They stand convinced that only Science, which for others is the bane of the present suffering of mankind, has the solutions to the problems it unwittingly creates for mankind.

(The author  is a senior journalist, based in Chandigarh. He can be reached at [email protected])

13000 SOS calls made over 4 days of communal violence raging in some parts of Delhi, and no response from 85000 strong Delhi Police force to come to the aid of the victims. The result: […]

NEW YORK (TIP): The Indian Overseas Congress, USA  has called for a ‘Bharat Bachao’ rally in front of the  Indian Consulate office (3 East 64th St, New York) on Saturday, December 14 at 1PM to […]

CAIRO (TIP): Dr. VK Raju, an eminent ophthalmologist based in Morgan Town, West Virginia, USA was invited to Cairo by the Egyptian Ophthalmology Society to speak on childhood blindness. He lectured on difficult cataract surgery, […]