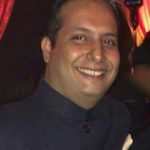 With a heavy heart, we convey the sad news of the sudden demise of Karan (Kay) Beri, President of RIC Technology & Services Pvt. Ltd. Bengaluru, Founder of Opinio Media Inc. and a Director of The Indian Panorama.

The only son-in law to Prof. Indrajit S Saluja, Publisher-Editor of The Indian Panorama, Karan Beri, 37, passed away on Saturday, May 6 in Bengaluru, India, leaving behind wife Jaskiran Beri and a ﬁve-year-old son Kabir Raj Beri.
Karan was born on 7th January 1979 to Ravi Beri and Amita Beri, a well-known family of Ludhiana.
He had his early education in Ludhiana where he studied at Sacred Heart Boys’ School. He studied Business Administration, obtaining his MBA degree from Punjab Agricultural University, Ludhiana. He worked with companies like IBM, Convergys, Hero Group and AirTel, in various capacities.
He was a top performer in every company that he worked with. IBM, pleased with his performance and professional competence selected him for an assignment in the US where he remained on deputation for some time.
Later, he decided to start his own information technology company and launched, in 2011, RIC Technology & Services Pvt. Ltd. with headquarters in Bengaluru.
With a view to expanding the horizon of his business, in January 2016, he founded Opinio Media Inc. in the US, a company to serve media industry, with his father in law’s newspaper The Indian Panorama as his ﬁrst client in the US. The list of Opinio Media’s clients grew phenomenally and the business grew. Karan had plans to move to the US to further expand the company’s business, a responsibility which his wife Jaskiran will now shoulder.
Karan was a brilliant student and topped at every level of his educational career. Innovation was always on his mind. He created in the last few years very usefuL software for media which he was experimenting with at The Indian Panorama to give it the ﬁnishing touches of perfection.
He got married to Jaskiran Saluja in 2006 and the couple were blessed with a wonderful son, Kabir in 2012.
We deeply mourn his sad and untimely demise and pray for eternal peace to the departed soul.

MUMBAI (TIP): As regulators try to contain one of India‘s most spectacular investment scandals, dozens of smaller but similar schemes continue to mushroom, employing tactics similar to the ones that enriched the Sahara group and […]

Modi, Rahul Gandhi square off on GST, state of economy

PM Narendra Modi hailed GST as consumer-friendly, whereas Cong vice-president Rahul Gandhi blamed it for unleashing ‘a tsunami of tax terrorism’ NEW DELHI (TIP): The government and the main opposition squared off over the Goods and Services Tax […]

NEW DELHI (TIP): The government is planning to go for local-currency-swap deals with trading partners to lower its dependence on dollars to foot the soaring import bills. It is looking at establishing multiple arrangements with […]