The program began with a screening of a curated selection of short films in support of the UN Sustainable Development Goals and specifically SDG 5 (gender equality and the empowerment of women and girls).  Four films from the UN Media: India – Girls For Sale; Lebanon – Women Carve Their Destinies; Canada – A History Of Violence; Iraq – Saving Women’s Rights in Iraq; and, Dr. Ruchira Gupta’s Emmy award-winning movie, The Selling of Innocents, were screened. 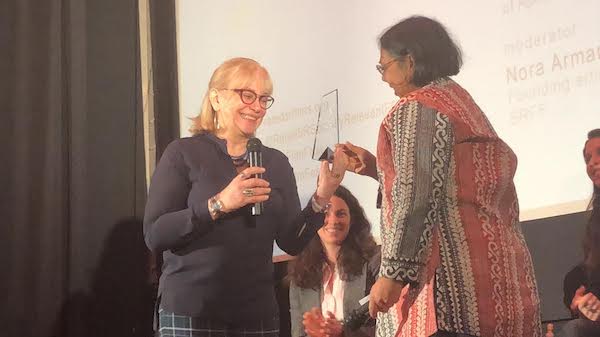 The other 4 panelists were Ambassador Swanee Hunt: Founding Director of the Women and Public Policy program, Harvard University’s Kennedy School of Government,

Gupta’s own journey had begun 21 years ago in making the documentary film, The Selling of Innocents, as a journalist.  She confesses that as a journalist she had covered war, famine, hunger and conflict but she had never seen and felt so chilling an experience as human trafficking: the exploitation of one human being by another.  Today, 21 years later, she feels the same about prostitution.

She said that based on current statistics – in India, there are 16 million victims of human trafficking now of which 10 million are victims of sexual exploitation.  The average age of a girl being pulled into prostitution in India is between 9 and 13 years.  In the US, she understands, the sexual exploitation is between 13 and 15.  So, there is not a very big difference!

The average age of a woman who’s prostituted, dying, is between 30 and 35.  So one can imagine the trauma, the victimization, the brutality!  Today, this industry is packing in more and more girls today into prostitution.

When she made the movie 21 years ago, there were no laws, no UN protocol of looking at prostitution as a form of trafficking. But today, we do have those laws, and protocol and framework.

After the Selling of Innocents was screened in New York, 21 years ago, at which Ambassador Swanee Hunt was a member of the audience, the demand of Gupta and Hunt was that laws and protocol be created.

Gupta, along with the support of Ambassador Hunt and the UNODC, emphasized that after 20 years of activism, they are moving onwards.

But the perpetrators and are more organized than the anti-trafficking NGOs. So, the NGOs and the public need to work harder, faster and go to each last girl they can think of, every last girl to prevent her from being trafficked. 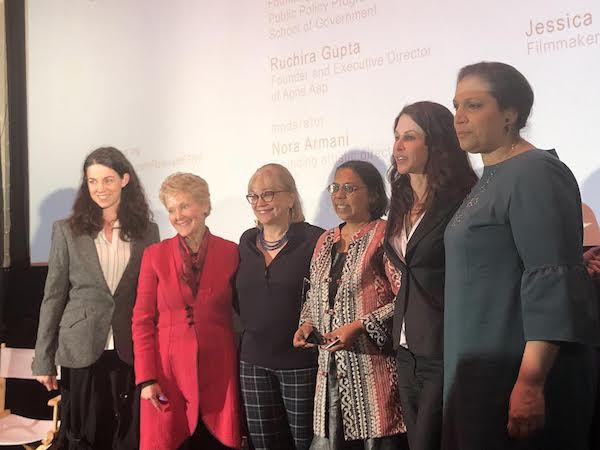 Ambassador Hunt said most people think of trafficking outside the United States.  But in actuality, American women and girls too are trafficked.  In the US in fact, 1 in 5 men in a southern city, have admitted to have bought a woman or girl, online.  She believes that we have to get down to the whole prostitution segment in order to get to the trafficking part…. because it’s embedded there.

Simone Monosebian said that in December 2013, owing to the efforts of the former US Ambassador to the UN, Samantha Power, under President Barack Obama, we have for the 1st time an actual Security Council Presidential Statement on human trafficking of persons.

She urged the audience to put pressure on her, then, the further she can go to put pressure on the UN Security Council to take action.When Felicia Greenfield was out one day with her 2-year-old daughter, she saw a brochure for a fundraiser for ECPAT-USA (the 1st US-based non-profit to work on the issue of commercial sexual exploitation of children).  Greenfield was shocked that this was happening in the USA!  Carol Smolenski, Director, ECPAT-USA, opened Greenfield’s eyes that human trafficking was happening everywhere, in all 50 States, in the big cities, in the suburban towns, in rural areas, in our own backyard.

She is working on this subject with the film, Good Girls Gone that she wants to be honest, truthful and respectful.

Jessica Vale, documentary film maker, was in Liberia for another reason.  But when she stumbled on the plight of Liberian young girls and mothers who had been raped and exploited, she and her co-producer set out to make the film “Small Small Thing” about the Liberian story, released in 2013.

The movie opened up a conversation in schools, in universities, all over the US.  They also realized that it’s happening in the US just as much!

Nora Armani, Founder-Artistic Director of the Festival ended the program on an upbeat note by awarding Dr. Ruchira Gupta with the Empowering Women and Girls Award in Memory of Vanya Exerjian.

For more information on the Socially Relevant Film Festival or to get involved, visit www.ratedsrfilms.org.

(Mabel Pais writes on Social Issues, The Arts and Entertainment, Health and Wellness and Spirituality)

Where Goes the Rupee?

“There are several moderate but effective instruments available to the government to help the rupee find an equilibrium”, says the author. The travails of the rupee have dominated newspaper headlines over the last fortnight. Its […]